2. What was your biggest takeaway from Session 1?

3. Work through the terminal commands review below using driver/navigator.

Git is a Version Control System (VCS). It allows you to save work on your project, and reference previous states of a project if needed. Normally when we save something on our computer, the newer version overwrites the older version. This is problematic if we need to look back at an earlier version. Git solves this problem by providing you multiple save points. You can get the current version, and ANY previous version. Git’s philosophy: never lose anything.

Git works similarly to the way that Google Docs tracks changes across time. Let’s take a brief detour to this Google doc.

There are numerous reasons to use git. Among them:

In this section on git, we’ll learn (or review) these git comamnds:

Git has a steep learning curve, and it can be super confusing at the beginning. Tonight's lesson is not meant to make you a git expert, but it will expose you to the basic git commands and workflow. Most likely, you will not have the commands or workflow memorized after tonight.

To get comfortable with git (just like with anything else), you will need to put in hours of practice. It's an excellent idea to go back over this lesson (either in print or recording) multiple times.

We’ll start with a directory called notes with a file inside called things_to_remember.md.

By default, your changes will not be tracked. In order to tell git that we want to start tracking something, we need to initialize git in a directory.

NOTE: If you don’t see this message when you try git init, it means you have not set up git on your computer.

1. You only need to initialize a directory once in order to track everything else inside of it.

For example, if I typed this while in the essays directory:

Then every file inside that directory, regardless of how deeply nested, would be available for git tracking.

Do not run the git init command more than once in the same directory or in child directories of the directory you initially ran it from. It will never be the answer to the problem you are facing

2. Empty directories are not tracked by git. Therefore, if you create a directory but there's nothing inside of it, git will ignore it. Git will only track it when there is a file inside of the directory.


3. What happens if you accidentally initialize git in a directory where you didn't intend?

When you type git init, a directory called .git is created inside of that folder. You can't see this folder using the ls command since it's a hidden folder. Everything that starts with "." is hidden. Instead, you can type ls -a which will display all hidden and visible files and directories.

In an git initialized directory, you'll see a .git directory. To remove git tracking, you would type:

This removes the git directory, and you are no longer using git to track your project. If you accidentally run git init in your home directory, and start tracking most of the files and directories on your entire computer, then remember to run rm -rf .git from your home directory. One way to tell if you've accidentally initialize git in your home directory is to first go home by running:cd ~ and then run: git status. If you see files being tracked but not staged for commit, then you need to remove the .git folder as layed out above.However, if your terminal returns:fatal: Not a git repository (or any of the parent directories): .git, then you are all good.

When you want to see what git is tracking and the current status of files, you can use git status:

No commits yet means that we haven’t asked git to save a version yet. You can think of a commit as a snapshot of your work at a certain point in time. In the Google Doc, each save point was a commit. So far, we have no commits for our notes project.

Untracked files refers to the fact that even though we initialized a git repository, we haven’t started tracking anything yet. It lists the files that are available to track. (Also note “untracked files present” near the bottom).

You can type git status as many times as you want, whenever, wherever. It it a safe command that will not change anything about your tracking.

Let’s talk briefly about this diagram from the git documentation. This diagram shows what you can do after you have initialized git: 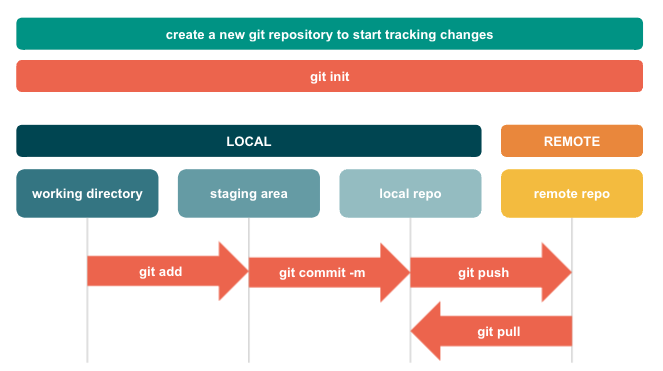 Let’s add one of the files that we want to track to the staging area. Google’s dictionary defines “staging area” as “a stopping place or assembly point en route to a destination”. If you’ve ever run a race, you know that the staging area is the place where all of the runners gather before the race begins. It’s a place to make sure everything is good to go before continuing on.

We will add our file to the staging area.

This may seem silly right now, given that we only have one file – why not just commit the file? Why do we have to add it first? Let’s take a small detour.

Now that our file is in the staging area, let’s tell git that we’re ready to commit (take a snapshot of this moment to save). It’s good practice to use “Initial commit” for your very first commit in each repository.

Now if I look at my git status, this is what I see:

Let’s figure out on the diagram what we just did:

Now that we have our initial commit (or snapshot in time), let’s make a change to one of our files.

We’ll open up Atom to make these changes - Do you have auto-save enabled?

Your working directory now has changes that differ from what our file looked like the last time we committed (or took a snapshot).

Then add your changes and commit them using an imperative verb that starts with a capital letter and a short commit message explaining what you did.

The basic git workflow is this:

Try It: Git Together

At this point, we'll split into breakout rooms. The person whose name is first alphabetically will start by sharing their screen, unless this person already has significant git experience. Whoever is sharing their screen will be called the driver. Every other person in the room will be a navigator.

The driver will be the person typing the commands, but the navigators should be the ones who brainstorm what comes next or what to type. In addition to naming the steps, discuss why you are doing each step, or what exactly is taking place in each step.

If you are already comfortable with git, your challenge during the breakout is somewhat more difficult: your goal is to focus on your explanations, communication, and ability to gauge whether or not another person understands you.

Things to Note: Oh no, my terminal is broken!

Mistakes in the terminal

Iteration (or looping for a specified number of times) is a process of repeating a task for each object in a collection. For each of the scenarios below, we’ll walk through step by step to demonstrate the concept.

These are examples that would be programmatically challenging because they would require a ton of steps, but are things that we do everyday.

By “in programming”, we mean things that could be done, with relative ease, by a computer. Like crunching numbers.

Try It: Iteration in Real Life and Programming

Brainstorm a real life scenario that uses iteration. Fill out the table below and be ready to share.

The ability to critically examine a problem and break it down into smaller pieces is an essential skill of a developer that can be improved with practice. Breaking large problems into several smaller problems can help you in every step of the development process:

Pseudocoding can help keep your thoughts in order, especially helpful for when you may need to put a little research into HOW to accomplish all the steps involved. Further, pseudocode is an excellent approach to explaining code to your team because it is programming language-agnostic, allowing non-technical teammates, or teammates who work with different code/technology, to understand your ideas more easily.

Psuedocode for Making a Cup of Coffee

On your own, write some pseudocode for how you would make a Peanut Butter + Jelly sandwich - remember, think about how you can break this “problem” up into the smallest parts possible to allow for the clearest instructions!

Watch as your TAs model how to engage in a discussion of technical content as they share their pseudocode for creating a sandwich!

Take a look at the example of a code challenge you might receive as part of an interview.

Challenge: Write some code that will determine the number of vowels in a given word/string.

Below is an example of some pseudocode that could be written for the challenge. What are some things that stand out?

Before we go any futher, understand that it takes a long time to get proficient at writing strong psuedocode. However, here are some indicators of “good” psuedocode:

Hopefully, A LOT! Psuedocoding can be a great process to employ any time you are “stuck” on what your program should be doing! Basically, if you can’t explain WHAT you want your code to do in your native language, there is literally 0% chance you’ll be able to write code to accomplish that task!

Additionally, psuedocoding comes in handy during technical interviews and code challenges for when you are applying for jobs. Interviewers want to see how you can break complex ideas down into language that everyone can understand - remember, as a developer you will often be working with non-technical colleagues in marketing, sales, etc. and hiring managers want to know that you can communicate with them!

Write your process for changing a flat tire on an automobile!

Everyone should read this article at some point after class - note that it’s written in Ruby, but again, focus on the process

Understanding git and the workflow can be tricky at first; however, this pattern is one that you will come to memorize over time. As you are memorizing the steps, be sure that you know what each step does.

Today (and during Mod 0), we’ll just be moving forward in time using git. We won’t learn how to go back in time, but it’s important to understand and main making small commits before adding in new git functionality.

We do not expect you to have these steps and reasons memorized right now. You can always reference back to this tutorial (or other tutorials that you find online). The more you practice, the easier it will become.

Check out this great resource from built by Turing instructor Amy Holt: https://learn-terminal.turing.io/

In your terminal (use shortcuts if you can) check if your ssh keys are configured correctly by running the command below and seeing a success message:

If you get an error message instead of the success message shown above, reply in the Slack thread with your output after running the $ ssh -T git@github.com command!

Find the homework in your Mod 0 Project Board. Post in the Mod 0 Slack channel if you’re stuck (and don’t be afraid to help each other out).

Now that we’re working on some more technical subjects, be sure to provide as much context as possible in your slack questions. They’ll help you get an answer faster and that answer will be more accurate. Use this guide to ask good questions!